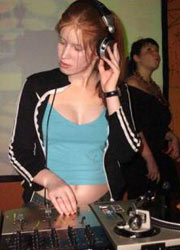 Barbara Wimmer alias Shroombab, born and raised in Austria (Europe), started listening to drum’n’bass around 1996 when she discovered the sound of her heart during a trip to UK. At this time she was already writing for different music magazines, when she was invited to start her own radio show at Radio FRO back in 1998 on a Saturday night. Many guest DJs appeared on her show and their sounds gave her the inspiration to start dj-ing and producing herself. In 2000 Shroombab met MC Terra and together they founded the Junglistic Sistaz, formerly a crew that has developed into a successful data:base for female junglists now. Many club and rave promoters, in whole Austria and all over Europe, invited the girls to play. During the last years, Shroombab has performed in 20 countries and more than 600 clubs, mostly as a headliner herself, or alongside artists like Bad Company, Dillinja, Dom&Roland, Dieselboy, DJ Storm, Makai, Dylan, Cyantific and Mickey Finn. She is now known for spinning hard- & techstep drum’n’bass with dancefloor- and jump-up orientated rhythms, wicked basslines and atmospheric breakdowns. She’s very vertasile though and can play liquid lounge and radio sets with soulful drum&bass as well.
Apart from that, Shroombab always had a big interest in music production, and it was back in 2000 when she started producing her own tunes. Since this time period she additionally collaborated with Mr. Polarity from Germany for most of the early productions, as well as Tomkin from Trickdisc Recordings. In March 2002 they founded the drum’n’bass-label “High Tension Recordings” with the aim to spread the sound internationally. Meanwhile her tunes got dropped into sets by Aphrodite, Mickey Finn, Andy C, L Double, Nicky Blackmarket and many more big name DJs. She got tunes signed to labels like Urban Takeover(UK), Protogen Rec.(GER), Urbadon Rec.(USA), Thermal Rec.(USA) and Trickdisc Rec(AT) and PhunkFiction(GER). So you definitely have to keep an eye on that lady!